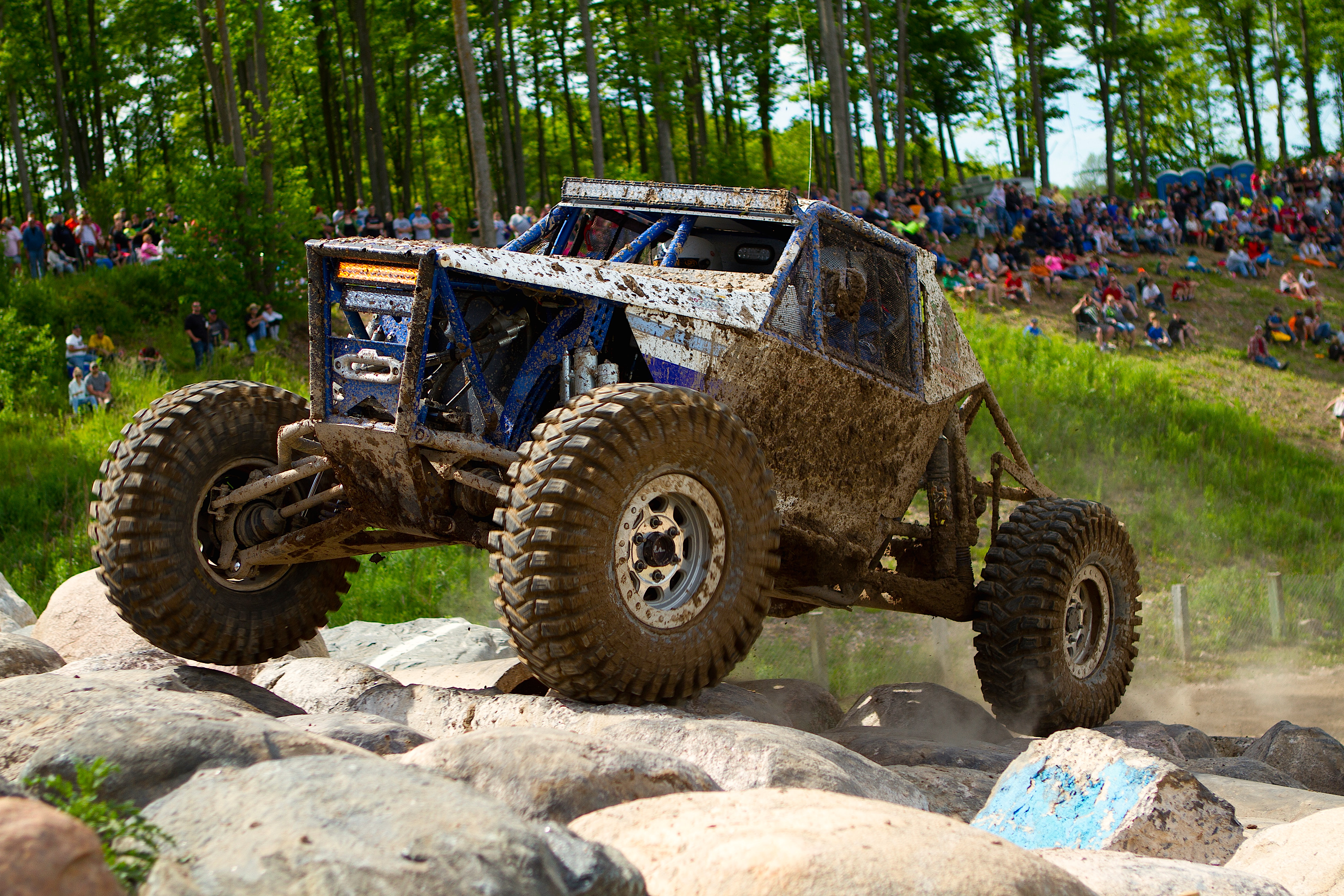 The weekend's big winner was Jason and Andy Shipman from Farmington, Missouri. With veteran rock racer Jason behind the wheel of this W.E. Rock 4400 class vehicle, the team repeated as winners of the prestigious Branik Cup. They took home a prize of $10,000 and a beautiful custom trophy for their victorious effort. (Chris Hord image)
CRANDON, WISC. -- With the last snippets of a brutal winter now a distant memory, warm sunny skies and an all-day, jam-packed schedule of racing greeted a huge crowd on hand for Saturday's 3rd annual “Londerville Super Challenge Off-Road Weekend” at Crandon International Off-Road Raceway.

After three years of growth, the third “major” event in Crandon International’s summer racing series set attendance and participation records for the all-encompassing, dirt-filled event. The track, known affectionately as the “Big House,” promoted a kaleidoscope of off-road disciplines utilizing different configurations of the 400-acre facility located in the picturesque Wisconsin Northwoods. While officials did not release final attendance figures, they were confident that the event had "doubled in size" since last year's running of the unique competition.

The first race on Saturday's schedule for the Crandon Sportsman Series was for the 1600 Light Buggy class. Representing the largest class of the day, 21 entries fought to take the year's first checkered flag. In the end, #201 Greg Stingle took a flag-to-flag victory with a great battle going on behind him between Matt Mullen and Todd Lemke.

Race 2 combined the Classix and Stock Truck classes. #613 Dale Chestnut beat #601 Bill Wilson and #655 Galen Gee in Classix and for the top three overall positions. The Stock Truck class was won by #520 Brad Milan, with #593 Diesel Shanak and #573 Lon Jaskie coming in second and third. 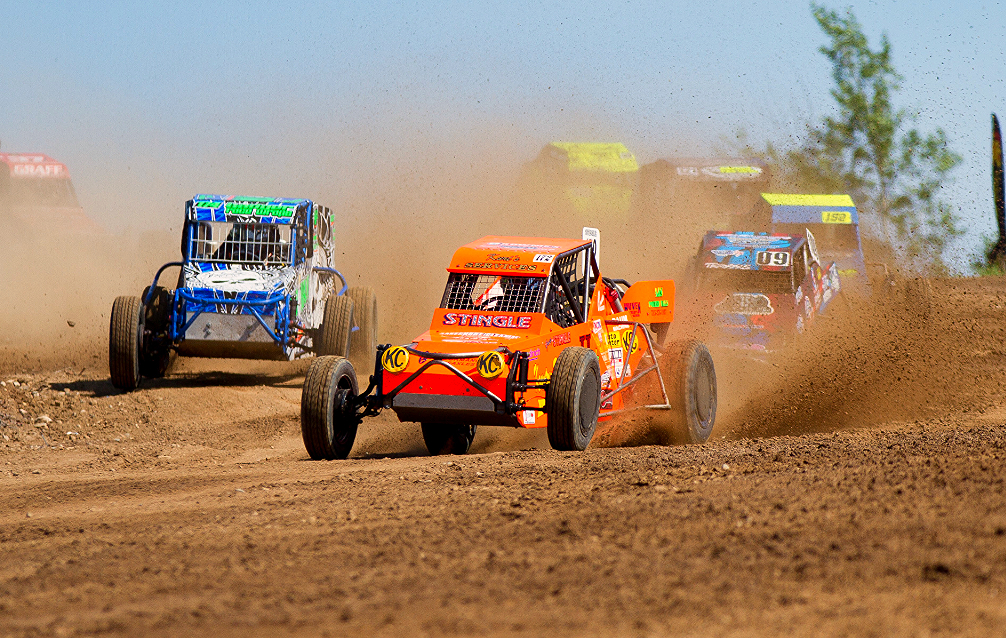 Greg Stingle, hailing from Black Creek, Wisconsin, took the year's first hole shot in Crandon's infamous Forest County Potowatomi Turn 1. The veteran racer went on to win the crowded 1600 Light Buggy division on Saturday morning. (Chris Hord image)
The ultra-fast Super Buggy class was next, with Rodney Vaneperen put on a driving clinic in Super Buggy, piloting his #45 car to a first place finish. Number 22 Herman Barnum was in the mix early but suffered the worst roll of the morning. He kept going thanks to the immediate assistance from the Crandon Track Safety Crew. Crandon veteran Scott Schwalbe took second, with son #2 Ryan Schwalbe rjght behind in third.

A field of 13 1600 Single Buggies cars took the green flag for the 12-lap race, with a tight fight for the opening laps. 2014 Crandon World Champion #331 Mark Steinhardt had to battle with West Coast veteran racer #312 Bruce Fraley (from Las Vegas) after Steinhardt got the hole shot. Hailing from nearby Rheinlander, Wisconsin, Steinhardt maintained his pace for the win, Fraley second and #326 Rob Kinner taking third.

The growing crowd was enjoying the midday sun as the 7 to 12-year old kids in the Crandon Short Course Karts took the green flag. These tiny trucks run under strict safety and competition regulations, and are a fan favorite. A slight incident off the start took held up 2014 class champion #77 Carter Vanden Heuvel, while an ultra smooth Owen Vaneperen copied his Super Buggy-winning father Rodney in taking the win. Gage Garvin took the runner-up spot, with Zack Wirhanowiz in third. 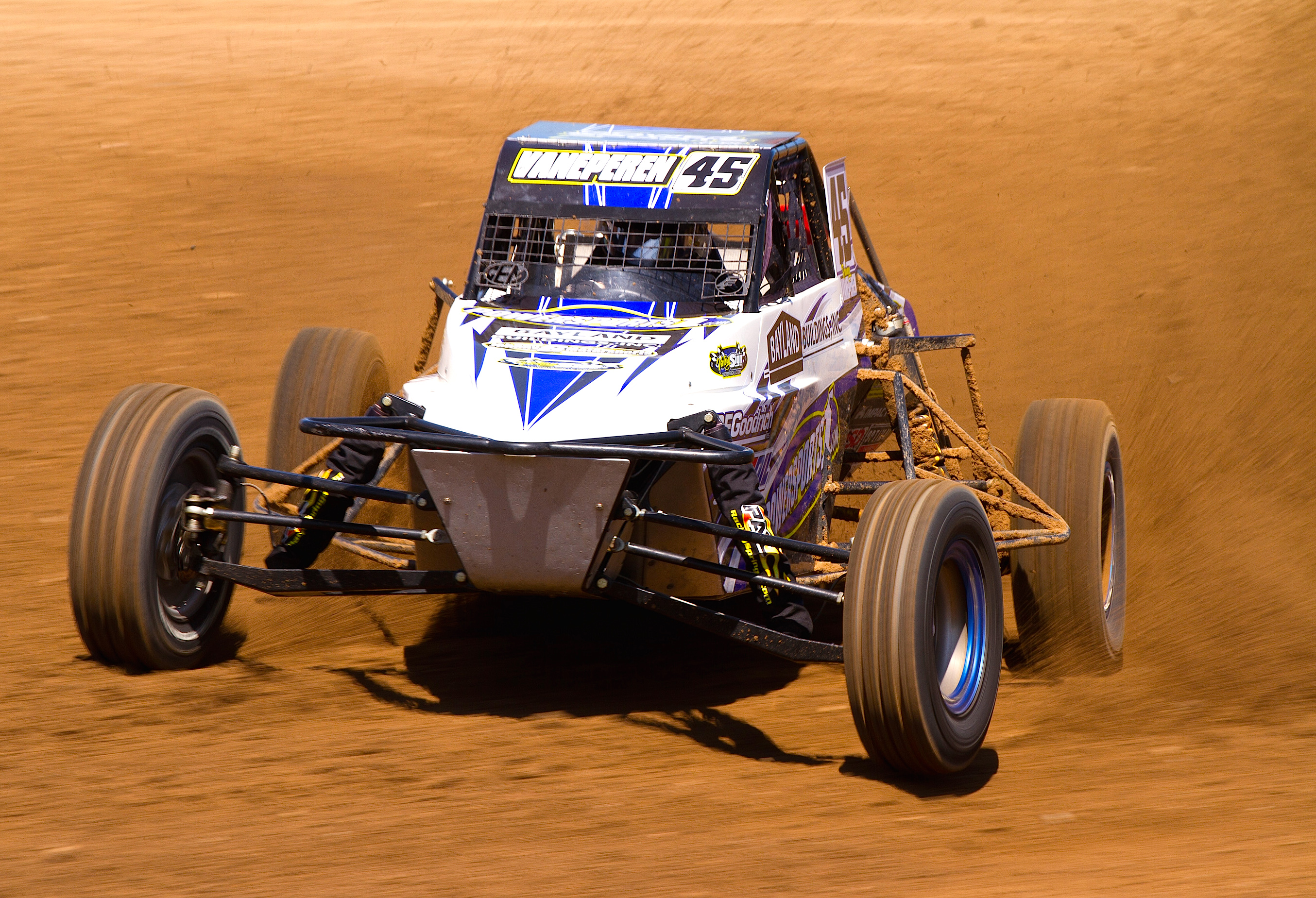 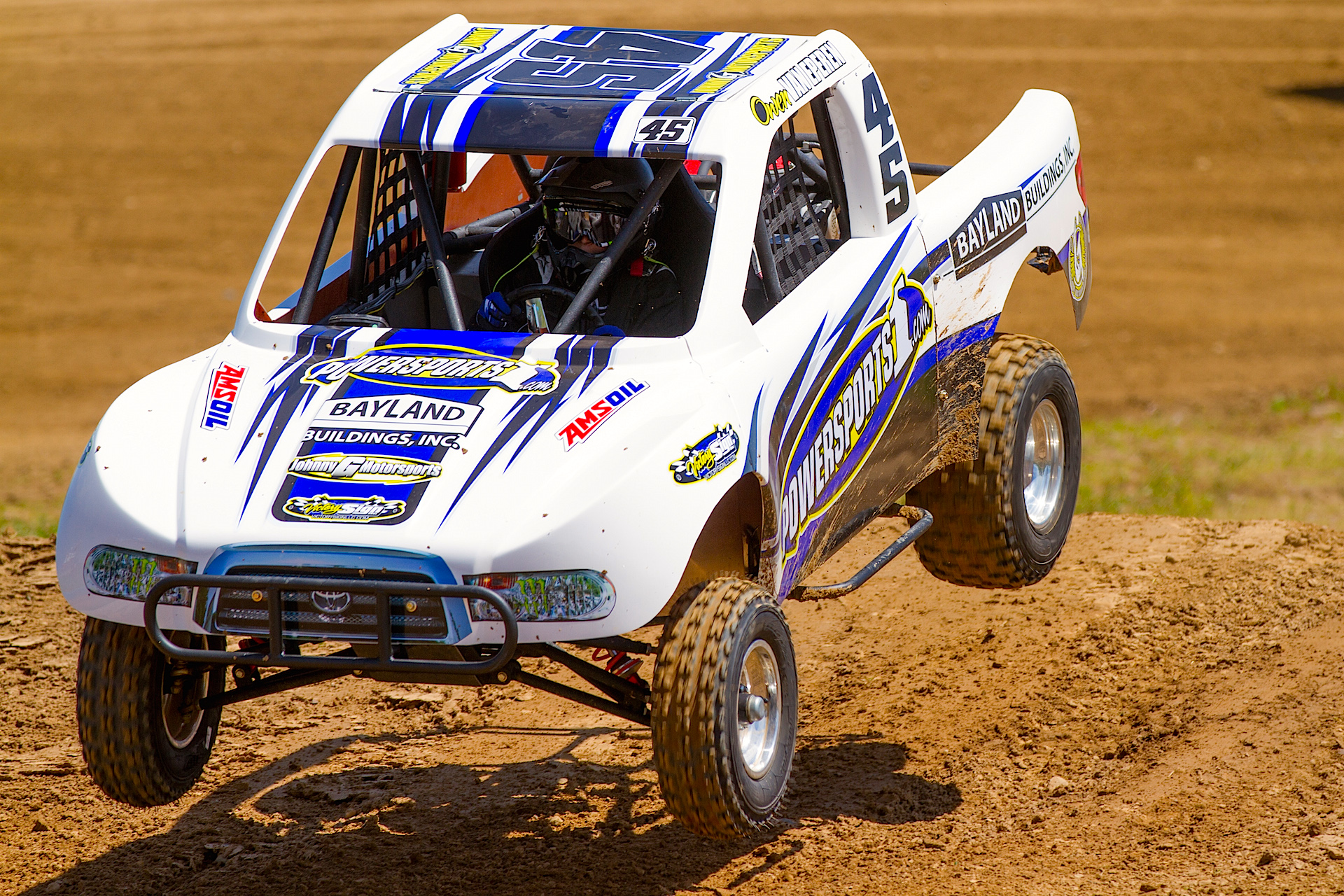 The Londerville Super Challenge represented a great event for the Vaneperen family from Rhinelander, Wisconsin. Not only did Rodney Vaneperen dominate the Crandon Sportsman Super Buggy Class (top) , his young son Owen took his #45 Short Course Kart to victory as well. (Chris Hord images)
Crandon’s Limited 4 and Formula 4x4 were next, with eight trucks racing side-by-side into the infamous Forest County Potowatomi Turn 1. From the onset veteran #17 Dan Baudoux set the pace, with #497 Jerry Conrad and #69 Milan Mazanec in hot pursuit. The pace took out Baudoux, moving #471 Brad LaMarche into third. Up front Conrad and Mazanec put on the rest race of the day, with Conrad smoking for much of the time. Mazanec took advantage at the halfway point, passing Conrad before claiming the checkered flag and starting his season right.

Crandon’s Sportsman Series’ Super Stock Truck category was next, with a huge and competitive field 17 vehicles strong. It was #826 Danny Beauchamp that raced into the spectator-friendly Crandon “short course” first, with #897 Mitch Dorr in second. Matt Siorek, driving the #827 was third. That order was shuffled with Beauchamp and Siorek putting on a great race. In the end, Beauchamp used lap traffic to get some breathing room, with Siorek and Dorr battling for the runner-up spot with #833 Nick Byng. In the end it was Beauchamp, Dorr and Siorek crossing the line after the best battle of the day. Crandon native Jay Schaefer earned a special award from track sponsor Amsoil for taking the seventh-place finish in Super Stock Truck.

The final, and fastest, Sportsman Series race of the day was for the Super Truck division. With nine trucks entered, it was Eric Ruppel with the hole shot in his #237 truck. In second came #248 Tim Nelson and then #222 of Mark Peterson. Ruppel’s racer looked like it was on rails, as he led the field through the halfway point and to the checkered flag. Nelson held on to second, with a smoking truck of Peterson making home in third. 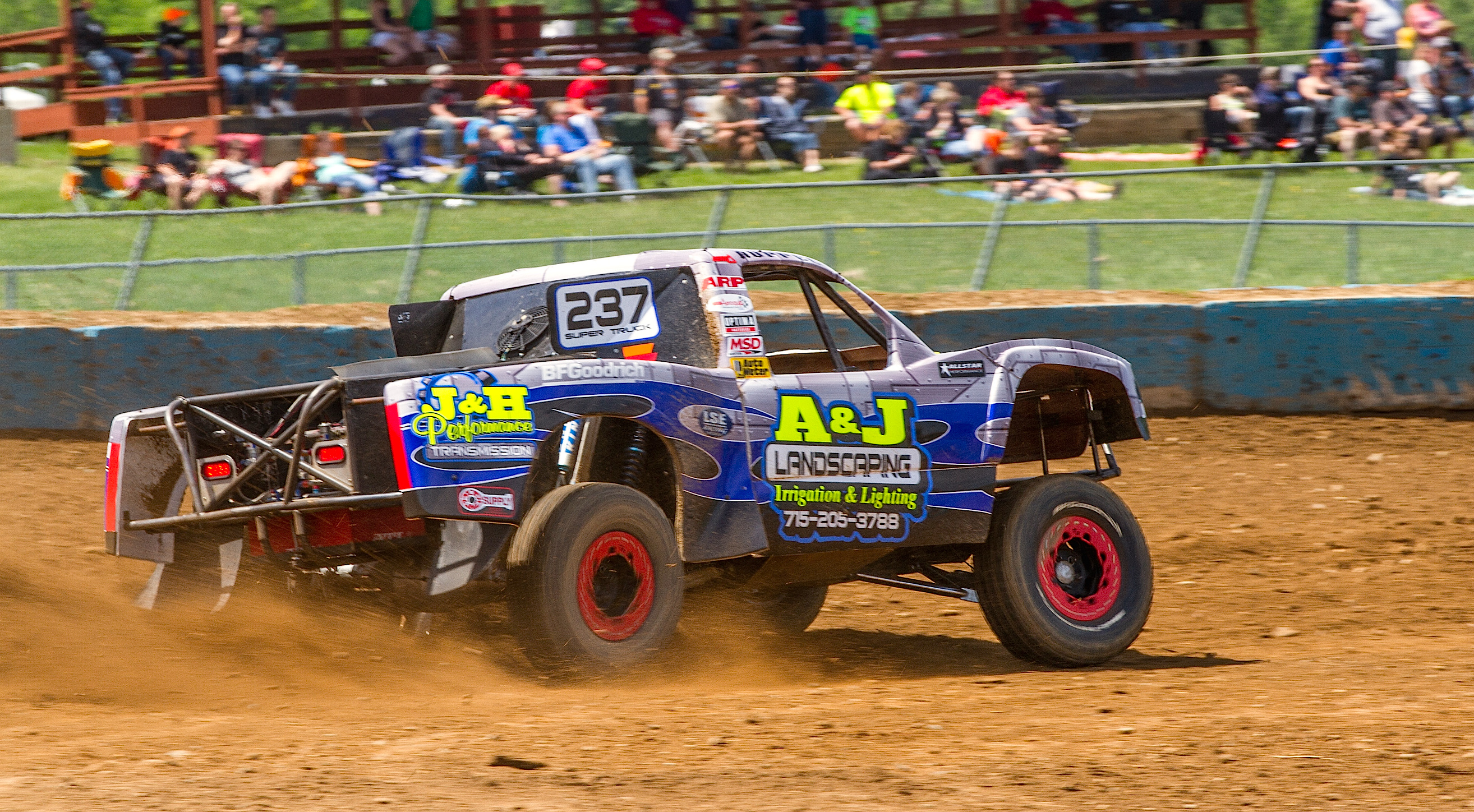 The powerful Crandon Super Truck division was won by Chetek, Wisconsin's own Eric Ruppel. These highly-modified trucks are the fastest of the Sportsman classes. (Chris Hord image) 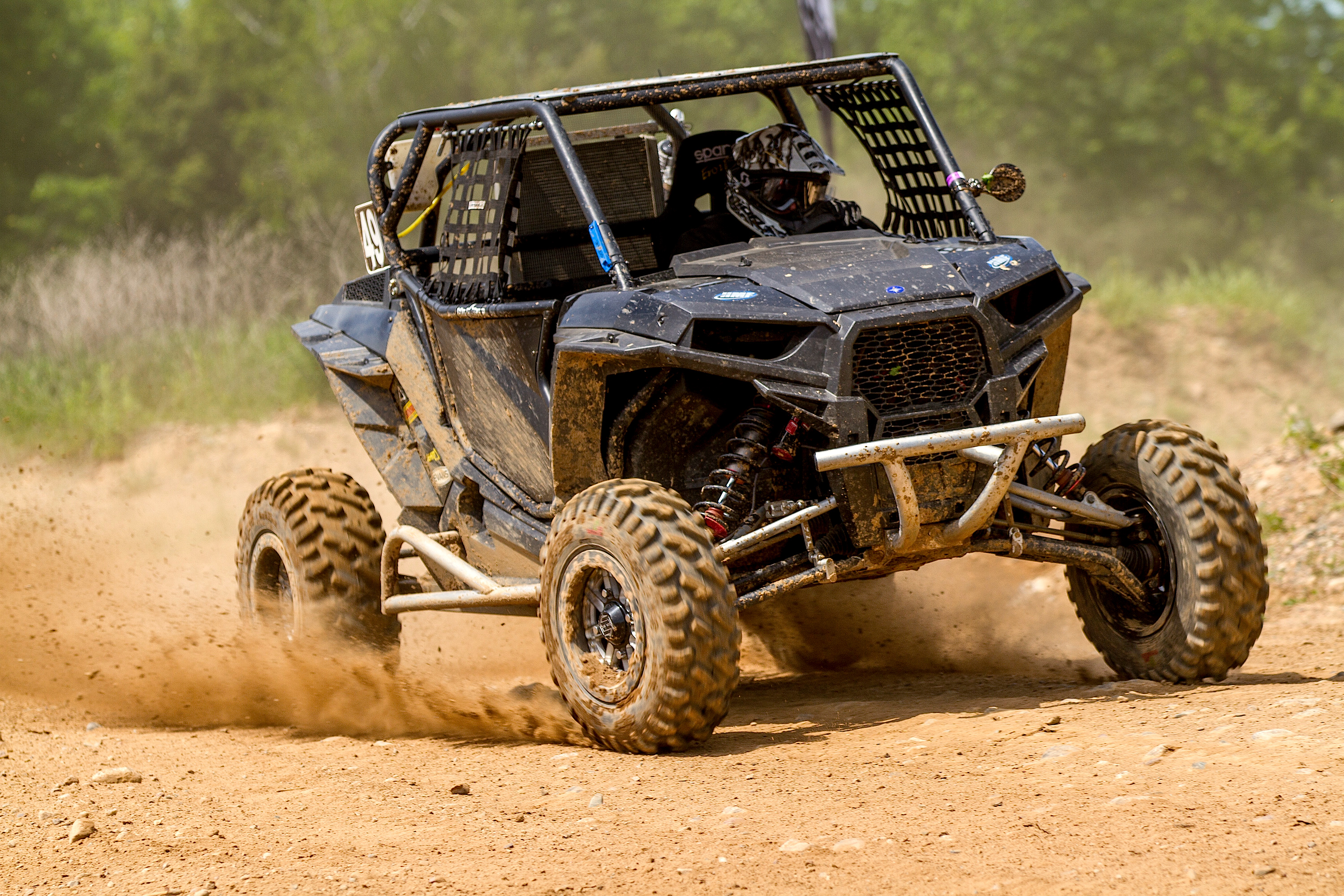 The growing W.E. Rock Pro UTV division used a unique combination of Crandon's race courses to put on a great display for the fans. This Polaris RZR 1000 driven by Brian Strane of Kenosha, Wisconsin, beat Blake Knabe who came all the way from Gainesville, Texas. (Chris Hord image)
With an intense morning of Sportsman racing concluded, the on-track attention on turned toward the W.E.Rock Dirt Riot competitors. Using both the track's "short" course and part of the new "forest" and rock crawling section of the facility, first up were the UTV classes. In Pro UTV Brian Strane beat Blake Knabe and Scott Wasz, while the UTV class was won by Jack Szymik over Jason Soule and Bob Murphy.

The hills near the rock crawling area were packed for the rest of the afternoon, as spectators enjoyed the noise and muddy fun of the West Michigan Mud Run group taking on a wet and wild track specially built just for the occasion.

Sadly, an all-night rainstorm late that evening and into the following morning forced Crandon officials to cancel the day's racing and postpone the second round of racing until Friday, June 26th as part of the 22nd annual Forest County Potowatomi Brush Run event.

"This weekend was really positive and also a bit disappointing, but we control everything but the weather," said Crandon's Cliff Flannery. "We had a large group of racers entertain an equally impressive group of fans, which is what every event promoter wants to see. Growth is the goal. We want to thank all of our supporters -- especially Londerville Steel -- for making this weekend possible. Our summer is off to a great start."

All weekend and camping tickets for the Crandon Brush Run race will be available at the gate.
# # # 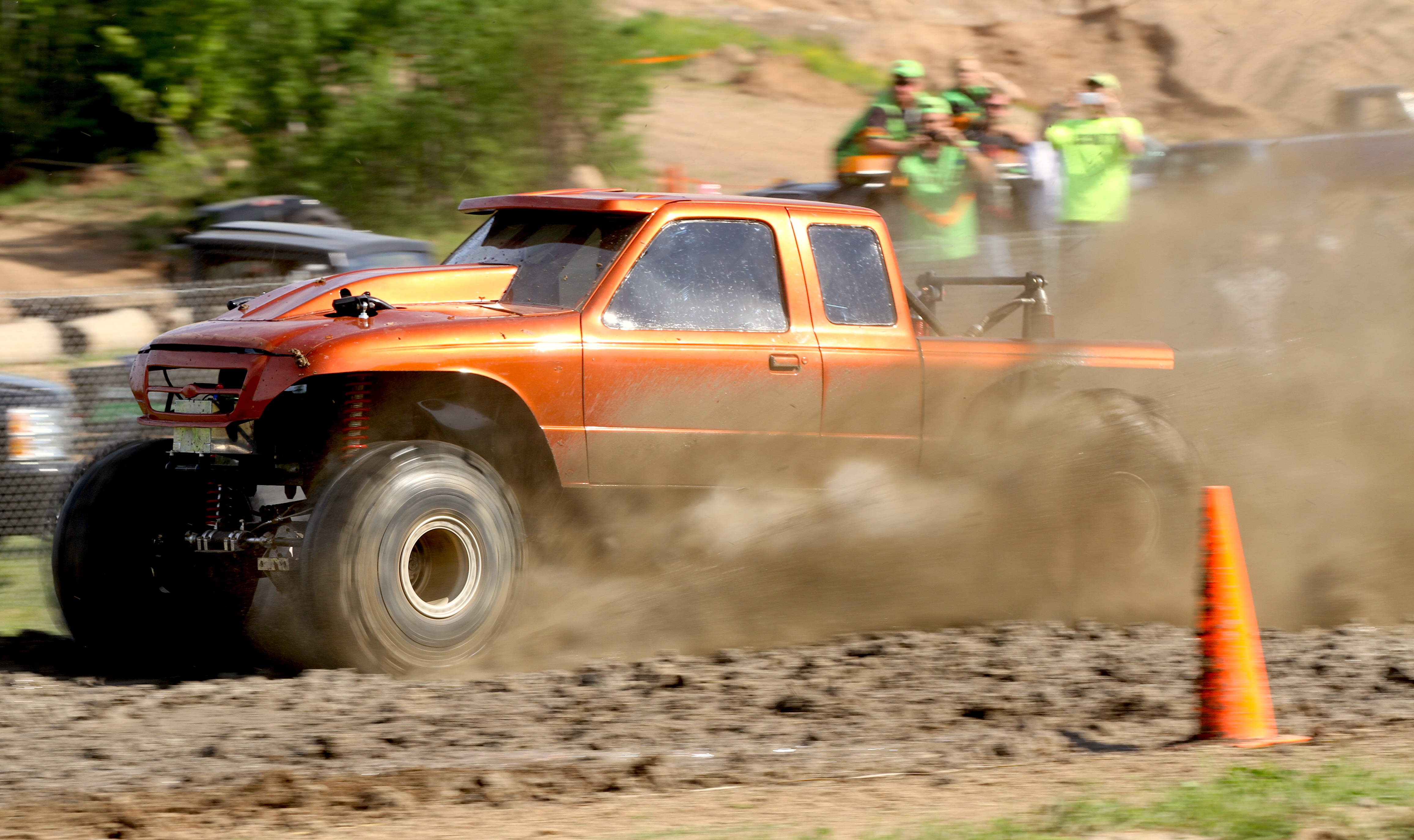